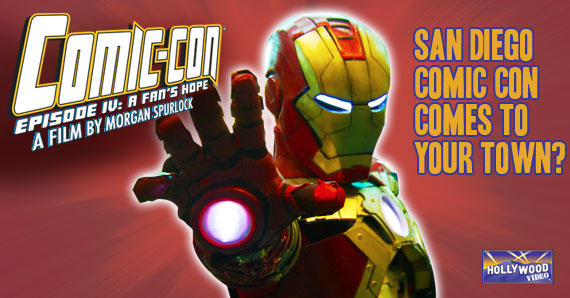 There’s been a lot of positive buzz going around about Morgan Spurlock’s new movie, Comic Con Episode IV: A Fan’s Hope. The documentary is based on the most anticipated pop culture event of the year and also follows the lives of five attendees as they descend upon the ultimate geek mecca at San Diego Comic-Con 2010.

Who, what, when and where?

Comic Con Episode IV: A Fan’s Hope has set showtimes starting April 5th, at the following 8 theaters around the country:

*In addition to these showtimes, the documentary will be available through your favorite On-Demand provider, also on April 6th.

These 8 screenings not enough for you? Apparently, a lot of people think so. With your help, not only will a potential of 7 more screenings at these locations can be brought to a town near you, but Morgan Spurlock will also be in attendance, hosting a Q&A!

Each of the events listed above need to meet a certain threshold before it goes live. Go to the movie’s website comicconmovie.com, click on “Bring Comic Con To Your Town”, and share the events on your Twitter, Facebook, Google +, Tumblr, or simply just tell your friends about it and make sure they RSVP as well! Easy enough.

So what are you all waiting for? This is the first look at what REALLY goes on during the world’s largest pop culture convention, otherwise known as, Comic Con. Get your Spiderman costumes ready, sharpen your fangs, test your Lightsabers, because Comic Con is coming to you.