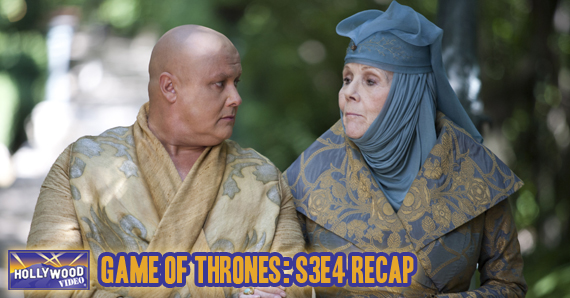 Where last week’s episode of Game of Thrones had one major OMG moment (http://hollywoodvideo.com/blog/game-of-thrones-season-3-ep-3-walk-of-punishment-recap/), this week’s had several.

While Joffrey runs giddily about he castle with his new manipulating bride-to-be, other characters aren’t having such a grand old time. His mother, Cersei, vocalizes her fear that the Tyrell house is already a problem and needs to be removed from King’s Landing, and Tywin Lannister shows just how indifferent he can be when picking favorites for his offspring. He’s too important of a man to be bothered with affairs like Cersei’s mothering skills. 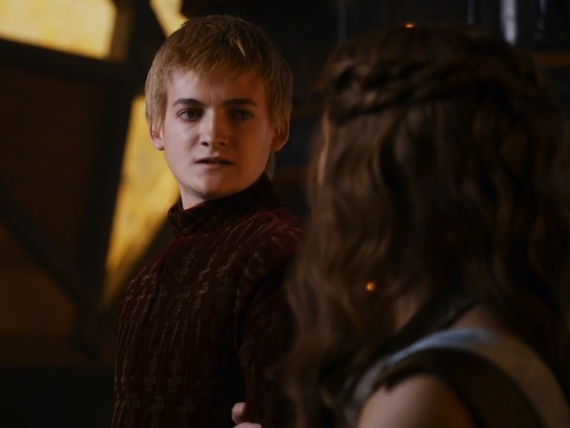 And speaking of Lannisters, all-star Jaime is having a worse time than any of his other blonde-haired family; House Bolton still holds him hostage, forcing him to wear his severed hand around his neck as a token of humiliation. As always, he attempts an escape when he manages to get hold of one of the lord’s swords, yet it turns out that he’s not so good with a sword when fighting lefty.

A big moment in the episode occurs early on, when Tyrion hears the story of Varys’ castration. Tyrion isn’t really interested until Varys opens a giant crate in his chambers, revealing the man who castrated him as a boy, having been held hostage for god-knows-how-long. 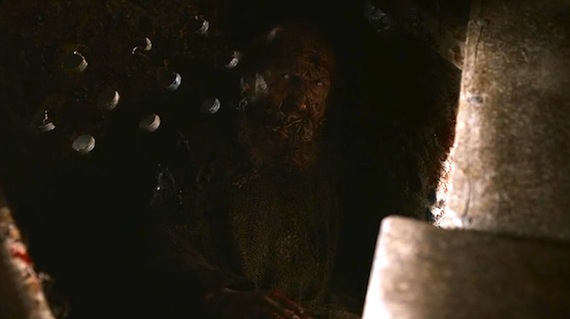 Who knew he had it in him?

The Brotherhood Without Banners, the clan that holds Arya and Gendry hostage, reveals itself to be followers of the same Lord of Light that Stannis and his army worship. This is another shocking moment for a couple reasons:

A little refresher: in last week’s episode, “Walk of Punishment,” the red witch explained that what she is seeking is even more powerful than a shadow-creature, and will change Staniss’ fortunes in this war, but she needs a king’s blood to do it. The witch can’t kill Stannis himself, but as she pointed out, “There are others with your blood in their veins.” For instance, any of his brother King Robert’s bastard children who managed to survive the purge.

This ties everything together in regards to the Brotherhood; if they follow Melisandre too, then hostage Gendry’s future doesn’t look so good. 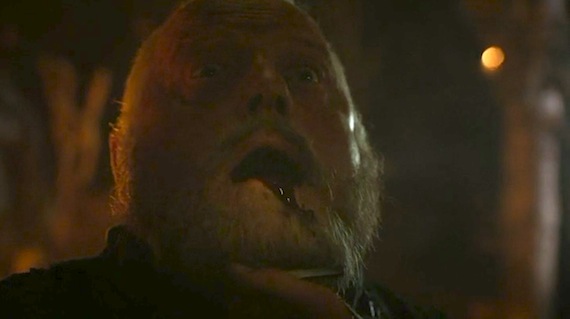 With the Night’s Watch starving in Crastor’s Keep, anarchy breaks out amongst the men. The ensuing riot kills not only Crastor, but Lord Commander Mormont. Stabbed in the back by one of his own men, Mormont could not have been killed at a worse time. Now the Crows will have no leadership just when the war gets exciting; Mance Rayder’s planned overthrow just got a lot easier. 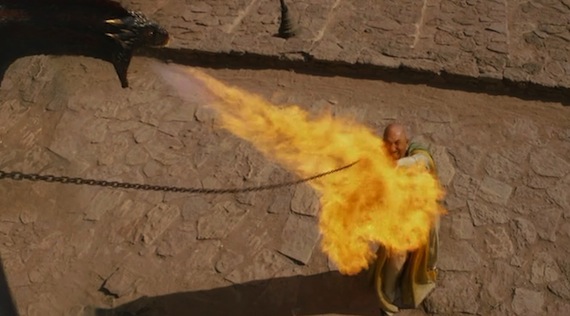 But the best scene by far was the last one. Danaerys Targaryan proves once again to be a severely underestimated badass when she manages to purchase her new army of (now freed) slaves in Astapor and keep her dragons by her side. Instead of trading one for the other, she has her largest dragon burn the head slaver as well as part of Astapor, just to make a statement. She now has the willing army she needs and is indeed a force to be reckoned with.