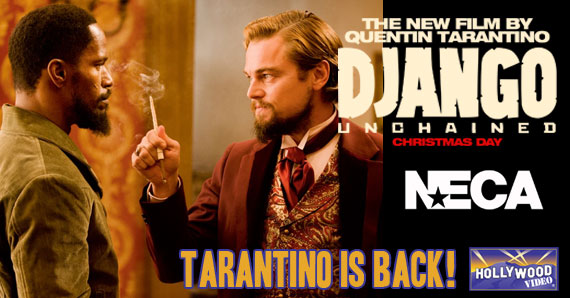 Quentin Tarantino’s new blockbuster Django Unchained is due in theaters Christmas Day and we’ve got the skinny on the new trailer and much more!

Starring Jamie Foxx, Leonardo DiCaprio, Kerry Washington, Samuel L. Jackson and Christoph Waltz, Django Unchained is the latest film written and directed by Quentin Tarantino. Set for release Christmas Day, 2012, it tells the story Django (Foxx), a slave two years before the Civil War, who makes a deal with a bounty hunter (Waltz) to try and rescue his wife (Washington) from a strange plantation owner (DiCaprio).

Of course, it’s Tarantino, so blood will the spilled, and the whole thing will be fantastic looking. We just got hold of this new trailer for Django Unchained, so check it out!

Some clever snooping around the interwebs resulted in the official plot synopsis and some production stills from the set! Looks like a pretty good setting for some gritty action.

Set in the South two years before the Civil War, DJANGO UNCHAINED stars Academy Award®-winner Jamie Foxx as Django, a slave whose brutal history with his former owners lands him face-to-face with German-born bounty hunter Dr. King Schultz (Academy Award®-winner Christoph Waltz).  Schultz is on the trail of the murderous Brittle brothers, and only Django can lead him to his bounty.  The unorthodox Schultz acquires Django with a promise to free him upon the capture of the Brittles – dead or alive.

Success leads Schultz to free Django, though the two men choose not to go their separate ways.  Instead, Schultz seeks out the South’s most wanted criminals with Django by his side.  Honing vital hunting skills, Django remains focused on one goal: finding and rescuing Broomhilda (Kerry Washington), the wife he lost to the slave trade long ago. 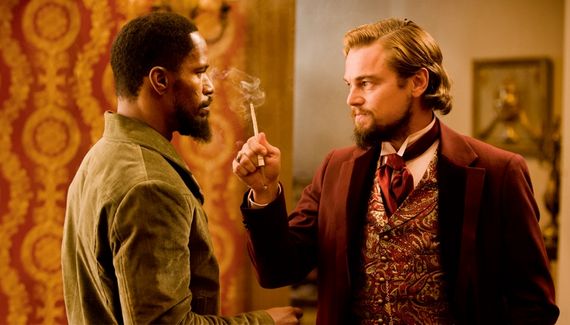 Django and Schultz’s search ultimately leads them to Calvin Candie (Academy Award®-nominee Leonardo DiCaprio), the proprietor of “Candyland,” an infamous plantation.  Exploring the compound under false pretenses, Django and Schultz arouse the suspicion of Stephen (Academy Award®-nominee Samuel L. Jackson), Candie’s trusted house slave.  Their moves are marked, and a treacherous organization closes in on them.  If Django and Schultz are to escape with Broomhilda, they must choose between independence and solidarity, between sacrifice and survival… 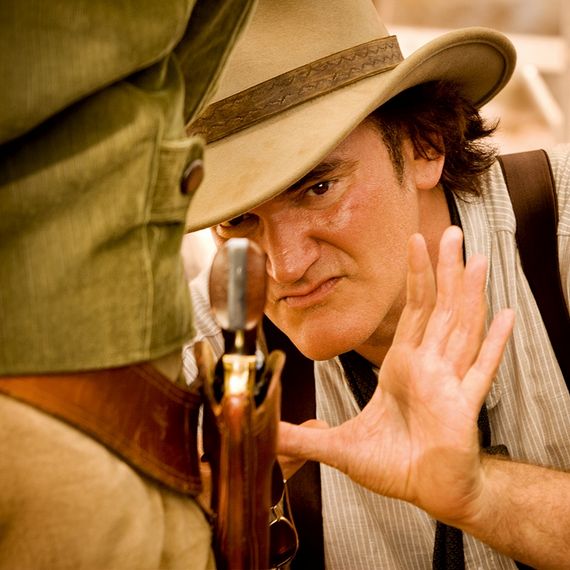 A Bit of Background on Bounty Hunting

No, it’s not all Boba Fett and Dog the Bounty Hunter. The Weinstein Company released this quick look at the history of this ancient and deadly practice:

Gotta Get the Goods

This week, the good souls at NECA announced they’ll be handling the merchandising for Django Unchained, including shirts, action figures and much more. Of course, Quentin Tarantino wouldn’t be who he is without his ’70s fetish, so how perfect is this:

Similar to the retro toy lines that helped define the licensed action figure market in the 1970s this collection will include poseable 8” action figures with tailored western clothing, authentic weapons and accessories, as well as a full apparel and accessories line. Characters included are:

The When and Where

The first batch of goodies is set to show up in November, so stay tuned here or over at NECA’s website for more, and check out the official Django Unchained website for news and updates closer to the Christmas Day release!