The trailer for Pacific Rim by Guillermo del Toro has just dropped, and the only word to describe it is “epic.”

While the word epic has been diluted nearly to the point of uselessness, here it takes on all the wonder and glory of its original definition. While the title may make the movie out to be some kind of volcano/earthquake documentary, in fact, it’s more like Evangelion meets Godzilla.

The movie takes place in a distant future where the ocean has a giant monster infestation, and humanity has constructed ginormous mechs to exterminate them. It seems a rift has opened in the Marianas Trench, and as in all giant monster movies, the Earth becomes some kind of Lovecraftian playground. Not much else is revealed about the plot, but who cares? It has both mecha AND giant monsters! I’m already in love.

This is the first time del Toro has helmed the director’s chair since Hellboy II way back in 2008, and this seems like a great way to get back in the spotlight. He did also co-write the screenplay for that movie about furry-footed little people and a dragon. 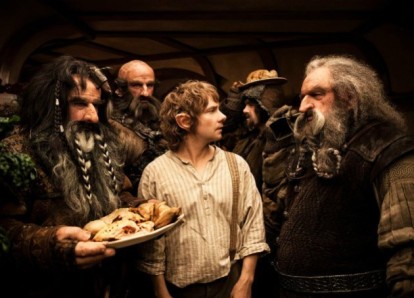 Hot Pockets are a Dwarven specialty.

The screenplay for Pacific Rim, however, was written by Travis Beacham, the man behind the Clash of the Titans remake. So at least he has experience writing about giant monsters. And to be fair, this movie isn’t going to be about the plot. It’s about giant monsters getting the abyss beaten out of them. That’s more of a visual thing, which del Toro has proven time and again he has on lock down.

While the movie trailer is with us now, we still have a ways to go before the movie itself drops on its release date of July 12, 2013.

Let’s hope the Mayans were wrong, because this movie should not be missed by something as mundane as the end of the world. Unless it has giant monsters.