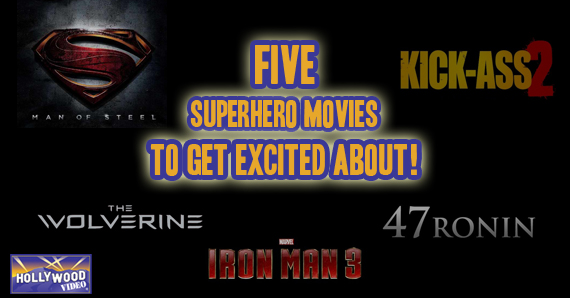 With the recent success of The Avengers and the epic conclusion to the Nolan Batman trilogy, we can’t help but wonder about the future of superhero movies and how they’ll keep up this crazy momentum. The good news is, these movies made a LOT of money, so there will certainly be more. Whether they’ll be on the same level as their predecessors remains to be seen, but here are five movies coming out this year that have the best shot at raising (or at least clearing) the bar.

Hey, we all love watching a former alcoholic portray a former alcoholic with superpowers, so it’s no surprise that there will be a third outing for the sentient soup can. This will be the fourth time Downey has put on the armor, and this time the story is being lifted straight from the comics. It’s based on the Extremis story arc, which is widely considered one of the best Iron Man stories out of some 50 years of publication, so you know it’s going to be pretty good.

We’ve seen a number of Superman movies throughout the years, but this one is expected to be the one that starts DC’s effort to put out a Justice League movie. Said to be a gritty reboot (aren’t they all these days?), this movie has some pretty big expectations riding on it. It will be interesting to see if the star-studded cast can make the Man of Steel the box office hit the Superman franchise deserves.

Hugh Jackman once again gets short, mean and hairy as he portrays everyone’s favorite X-Man for a… what is this, his third time as Wolverine? The fourth? Does it really matter? Probably not. It’s Wolverine. It could be set on third moon of Saturn and you know you’d go see it. Jackman always does a fantastic job of bringing the mutant to life on the big screen, and people will eagerly flock to this outing.

The first Kick-Ass might have flown a little under the radar, but it was a surprisingly good movie that took an unexpected turn about a third of the way in and had me hooked. Hopefully the sequel will be as good, and maybe bring some more widestream acceptance to the superhero with the terrible name.

This is originally a Japanese story about 47 samurai whose master is killed and they pledge to revenge themselves on his killer. It’s a classic of Japanese folklore, and I had no idea it had been translated to the comic media until I heard about this movie. Feudal Japan, samurai, sword fights; this movie has it all. It also has Keanu Reeves as the star, who is decidedly not Japanese. But Tom Cruise pulled of his samurai movie flawlessly, so we’ll give 47 Ronin the benefit of the doubt.