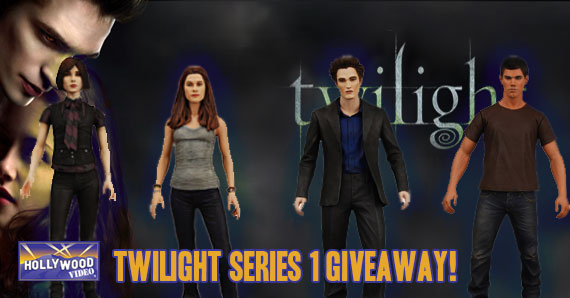 We had an outstanding number of entries in our recent Kill Bill giveaway and we wanted to do even more. This time it’s in celebration of The Twilight Saga: Breaking Dawn Part 2, which is set to be released in just a few short days on November 16th. We received a complete series 1 set of Twilight: New Moon figures from NECA, and the set includes Edward, Alice, Jacob and Bella.

Be sure to check out the trailer for the last installment in the series!

As you probably remember, we’ve discussed the popularity of The Hunger Games versus Twilight and we’ve even talked about Kristen Stewart’s facial expressions, but until now we haven’t given away any cool Twilight merch. So here’s your chance!

The winner of this giveaway will win the complete Series 1 set of figures from The Twilight Saga: New Moon.

Edward Cullen is the main character of the Twilight Saga. He became a vampire in 1918 to be saved from a life threatening disease. Some of his special abilities include mind-reading, super speed, and extraordinary strength.

Alice is the adoptive sister to Edward and is the sister he is closest to and most fond of. Alice has some superb special abilities such as being able to see the future — unless werewolves are directly involved in the event. 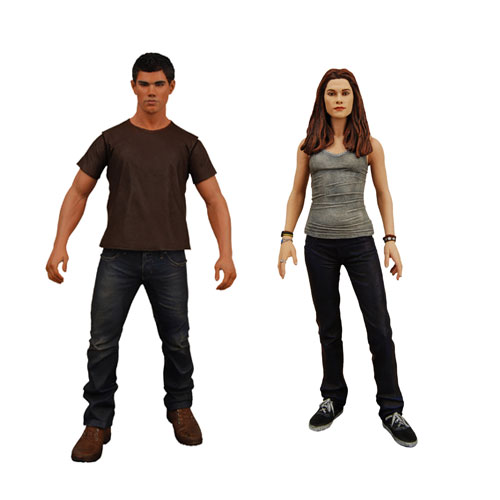 This exclusive two-pack contains both Jacob and Bella. Jacob is Edward’s rival and enemy. The two are locked in an eternal struggle due to their history and the fact that werewolves and vampires are a volatile mix. This special set of figure also includes a limited edition poster.

In order to gain entry into this giveaway you will need to answer the following question – “Who was originally going to direct The Twilight Saga: New Moon, but had to back out?”

It’s always easy to enter our giveaways… you just need to answer the trivia question! If you want to gain more entries you can get a big advantage using Facebook and Twitter.

We will be continuing to do even more giveaways this holiday season but we need your input. Let us know what you might like to see given away and there’s a good chance you’ll see it next!