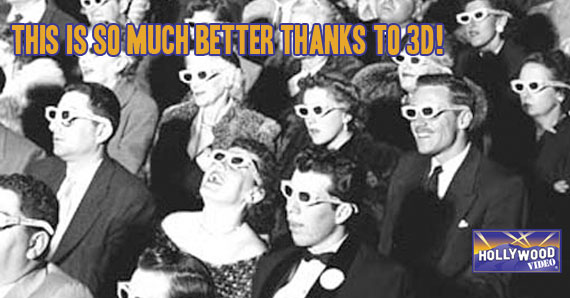 Another “sequel nobody asked for,” G.I. Joe: Retaliation has been generating some surprisingly positive buzz despite itself. Thanks to a fun looking trailer and a fresh cast that includes action movie gurus The Rock and Bruce Willis, there was talk of people actually looking forward to this one. And then instead of a summer release this June, Retaliation was suddenly, and surprisingly, pushed back an entire nine months to March 29 of next year. Why? 3D.

I Swear It’s Not Channing’s Fault!

Speculation flew that the delay was a scramble to fix a broken movie or to cram in more Channing Tatum. Both Paramount, and director John Chu, however, insist that the sole reason for the delay is for a proper 3D conversion.

You know you want to see me in 3D…

Chu has used 3D successfully before, but is it really worth this huge delay? It may be expensive to convert the film, but during a time when moviegoers are willing to pay a premium for 3D, it makes monetary sense. The question is, will that still be true in 2013?

Today’s 3D trend really took off after the success of Avatar. Due in no small part to IMAX and 3D, the movie brought in an almost unimaginable sum of money – and so the copycats began.

This is not the first time 3D has been popular. It’s as old as movies themselves and has seen bubbles of success every few decades, only to fade away. Many moviegoers are already saying the trend is about to die again.

Something that sets this current bubble apart from those in the past is the technology. The effect is starting to be looked at as a serious tool and not just a gimmick. When done right, it can add some real beauty to a film like the following movies:

However, in the case of cash-grab films the 3D is subpar or painful. Some examples include:

And some are just a blatant gimmick. I’m looking at YOU, Piranha 3DD.

In the case of Retaliation, I think it’s about the money. Even when done “properly,” like the nine months will allow for, post production 3D still doesn’t look that great. If the studio had really felt the movie would benefit from an added dimension, they would have filmed it that way from the start.

So, do I think people will still pay for 3D in 2013? Perhaps. There are a few big 3D movies this year that could really deliver. Among them are Prometheus, The Amazing Spiderman, and The Hobbit. Any one of these films – especially The Hobbit which claims to be a cinematic revolution – could be the one to remind us just why we thought we loved 3D in the first place. Other movies, like Retaliation will then continue to have a chance to capitalize on the trend.

Listen! This is how it’s done…

Despite what history would tell us, this time I think 3D is (for better or worse) here to stay.