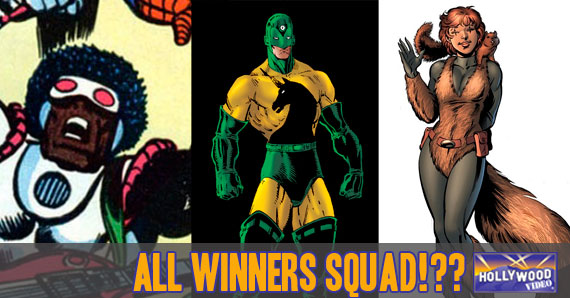 Marvel announces the All-Winners Squad at this year’s Comic-Con. We’re gonna go ahead and cast the movie.

One of the announcements we’re most looking forward to at this year’s San Diego Comic-Con is Morgan Spurlock’s reveal of the new Marvel All-Winners Squad. Details are still pretty sketchy, but a few leaks have gotten through about who’s involved and what the idea is behind the team.

The All-Winners Squad brings together lesser known cult heroes from the 8,000-character-strong Marvel Universe, and while you probably haven’t heard of Squirrel Girl, the Hypno-Hustler, the Unicorn or Doop yet, it’s only a matter of time. When Stan Lee announces something, it stays announced.

But as we all know, nobody’s anybody in Marvel until they’ve got a $100 movie under their belt. We thought we’d start the casting process early on The All-Winners Squad, which we can only imagine is coming soon to a theater near all of us. Here are our picks:

Watch out for furries. You’re gonna get some furries on this one.

True, she’d have to dye (or stop dyeing, whatever) her hair, but Michelle Williams works especially well for Squirrel Girl. With her high cheekbones and two dots for a nose, she’s perfect for the part. Plus, we already know she can pull off a pixie-cut, and she’s got “real actress” cred, which any script for The All-Winners Squad we’d approve would be a great way to squander.

Face it, you can pretty much already picture Michelle Williams having the ability to talk to squirrels. Somebody get her agent on the phone!

Bootsy Collins as the Hypno-Hustler

Making the world safe AND funky!

Say what you want about Old Navy commercials or this and that, Bootsy Collins is the funkiest guy who ever walked the earth not named George Clinton. Rumor has it they’re renaming the Hypno-Hustler to the way-less-problematic Hypnoman, but either way, even though Boots is a little older, he’s gotta be the guy. Can he act? Who the hell cares? He comes with his own costume!

The Hypno-Hustler lures people into a trance with his guitar, and even though Bootsy plays bass, we’re pretty sure he can pull it off. If he can do a Christmas album, he can do anything.

Sam Worthington as The Unicorn

Are you man enough to play the Unicorn, Mr. Worthington?

When you’ve got a character called the Unicorn, you’ve pretty much got to find the manliest manny man man to play the part, and these days they don’t come any dudelier than Sam Worthington. Star of Avatar, Terminator: Salvation and Clash and Wrath of the Titans, he’s bound to lend some action hero star power to The All-Winners Squad, not to mention a jawline.

Only downside is we don’t know if he can do a Russian accent. If they wanted to keep that and go completely the other way with it, they could get Anton Yelchin, Worthington’s co-star in Terminator, who also played Chekov in the 2009 Star Trek reboot. Not quite the same action hero status, but he’d be bound to pull in the tween demo.

Sure, Slimer is translucent, but they can take care of that in post.

Yeah, that’s right. Slimer from Ghostbusters. You know he hasn’t worked in a while, and since Doop is pretty much the same thing, we figure it should be well within Slimer’s range to take on the role.

Doop may be an alien, or he may have been a science experiment, and there’s a halfway decent chance his brain exploded, but what the hell, Slimer’s a ghost, so book it.

Where the real money from the picture is made

As Morgan Spurlock, who directed the Comic-Con Episode IV: A Fan’s Hope documentary makes the official announcement of the All-Winners Squad this Friday at SDCC 2012, our good friends at NECA will be there as well with some limited-type t-shirts for the truest of true believers. Check it out: 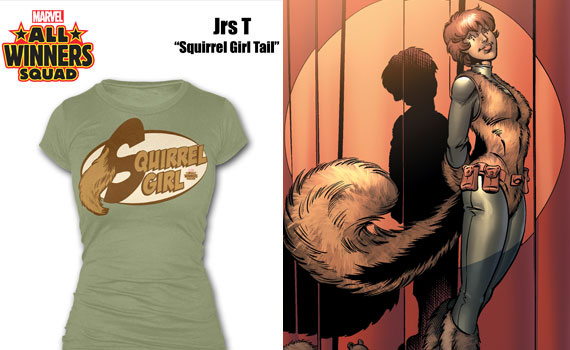 Perfect for the Squirrel Girl in your life. 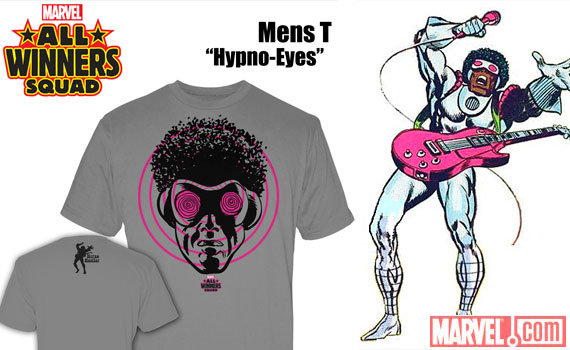 How did this guy not make it into The Avengers??? 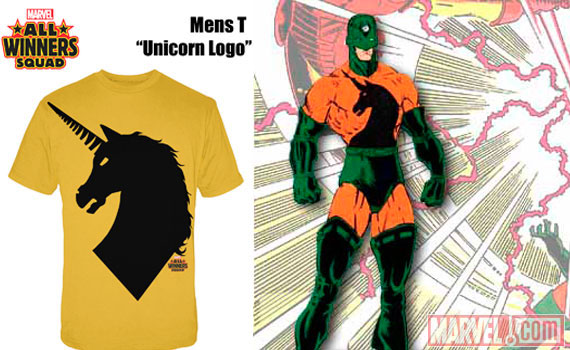 Alright, you know what? That logo’s actually pretty cool.

As these unknown heroes unite to get their due, don’t miss out on the goods.

They’re only bringing 500 of each to Comic-Con, but another 250 of each shirt will be available through Hot Topic starting tonight at midnight.

Think of the shirts as something to hold you over while you wait for both the announcement of the All-Winners Squad and the inevitable trilogy franchise to follow. If you”ll be at Comic-Con this year, make sure you get to Room 8 on Friday in time!