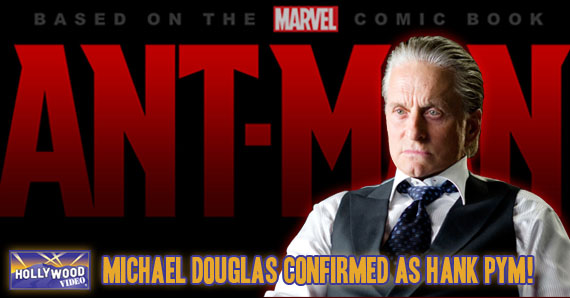 After much conjecture and uncertain media reports, Marvel.com confirmed that Michael Douglas, fresh off his Golden Globe win for his role as Liberace in Behind the Candelabra, has been tapped to play Marvel Comics superhero Hank Pym in Edgar Wright’s adaption of Ant-Man, while Paul Rudd will play Scott Lang.

In December, Paul Rudd – mostly known for comedic turns in Role Models, Knocked Up, and Anchorman: The Legend of Ron Burgundy – had already been attached to the film. That brought up questions of which version of Ant-Man Rudd would play.

In the Marvel Comics universe, multiple characters had filled the role of the diminutive superhero. Hank Pym, the original Ant-Man, was a scientist and one of the founding members of The Avengers in the eponymous comic that debuted in 1963. Scott Lang, a former thief-turned superhero, was the second character to take on the mantle of Ant-Man.

Edgar Wright, best known for his collaborations with actor/screenwriter Simon Pegg in bringing Shaun of the Dead, Hot Fuzz, and The World’s End to the big screen, has been sparse with details on whether or not the film will take a comedic turn or a more serious slant. However, with Michael Douglas attached and assurances that the film will take place in the Marvel Films universe, it would be easy to speculate that the film might have smatterings of humor in the same manner of Joss Whedon’s The Avengers movie.