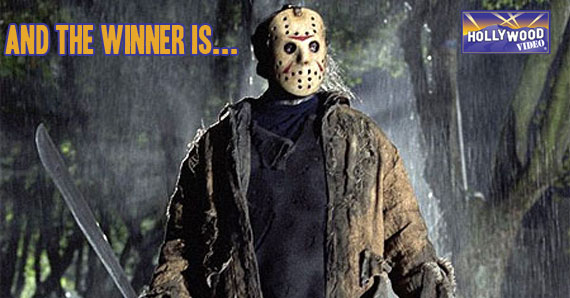 Last week was the kick-off of our Bi-weekly Giveaways! Our first contest was in honor of Mr. Jason Voorhees and his sick and twisted murder rampages. We asked everyone to tell us their favorite Jason kill and why. The person who came up with most creative and original entry won this awesome Jason Mask.

And The Winner Is…

We had a lot of awesome answers to choose from. Not gonna lie, I personally had nightmares all week, even while sleeping with my bedroom light on. You know, just in case. With that said, the winner of this week’s giveaway is: Mike J. via Facebook submission!

Mike chose one of Jason’s trademark machete down the middle, junk first, in Friday The 13th Part 3. Mike genius-ly added that maybe Andy, the unlucky one on the receiving end of Jason’s machete, called Jason a Mama’s boy. Perfection.

To see the winning kill, click HERE. Disclaimer: This photo is NSFW and pretty damn gruesome. You’ve been warned.

There were a handful of entries that deserve a shout out.

We wish we had more masks to give to everyone, but only one can win! However, we do salute these honorable mentions.

Remember, we will be holding giveaways all summer, so keep checking back! There will be plenty of chances to win some awesome movie products.

Thanks to everyone who entered this week! You guys killed us. Pun intended.