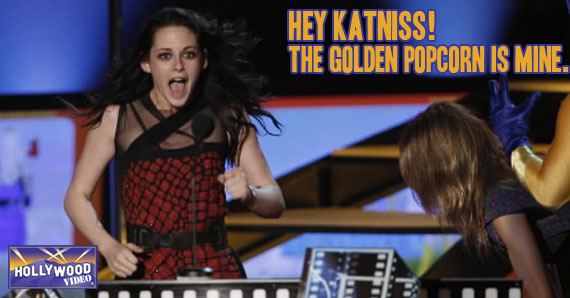 This Sunday, June 3rd, marks the 21st Annual MTV Movie Awards. Unlike the other award ceremonies, this one is known the be the most entertaining. Instead of boring (sorry) categories that no one understands like, “Best 3 Minute Short Foreign Commercial Animated Musical”, the MTV Movie Awards has awards for Best Kiss, Best On-Screen Dirtbag (our favorite) and Best Fight, to name a few.

Ever since 2009, the Twilight Saga wins almost always every single award. Let’s face it, there’s never a shortage of Bella and Edward fans (can’t say we blame them). But this year might be different. With The Hunger Game’s release, it might be the first time Twilight’s usual clean sweep will be put in jeopardy.

Maybe it’s because Breaking Dawn came out way back in November, but the epic Twilight Saga is only nominated for 2 awards, when Hunger Games is nominated for 9. There was a lot of well deserved hype when it came to The Hunger Games. The Box Office numbers show that opening weekend, HG beat Breaking Dawn with an impressive $152 million while Bella and Edward brought in $138 mil. However, if you look at the long term numbers, in 2 1/2 months, IMDB reports that Breaking Dawn made just under $702 million in the Box Office and The Hunger Games is just shy of $400 million since its debut at the end of March.

Who would you rather…

One of the 2 awards Breaking Dawn is nominated for is Best Kiss. Kristen Stewart and Rob Pattinson won this award 3 years in a row, giving their fellow nominees no chance in hell. This year, they might not be so lucky. When it comes down to it, who’s more kissable- Peeta or Edward? The other nominees include:

This is gonna be a close one…

Movie Of The Year

The next shared category is the highlight of the evening, Movie Of The Year. Once again, Twilight won this award 3 years in a row. It would be a shame for them to end their golden streak, but 2012 might be the year where people prefer a bad ass female heroine instead of the damsel and distress that is Bella. But who knows, the audience might surprise us and give the Golden Popcorn to The Help, starring Emma Watson. The movies also nominated include:

Not to make it sound like The Hunger Games and Breaking Dawn are the only two movies nominated in this year’s MTV Movie Awards, but we’re just keeping it real. Hopefully the voters show Harry Potter and the Deathly Hallows: Pt. 2 some love since it’s the last Potter movie.

Don’t forget that Harry and his pals were fighting evil way before sparkly vampires and Katniss Everdeen.