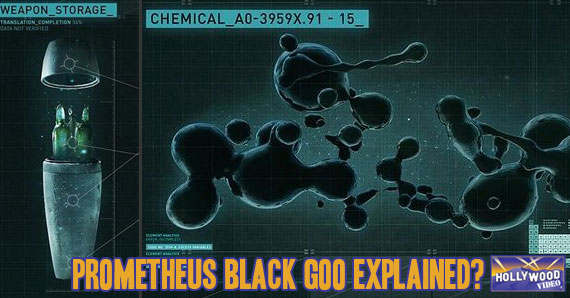 Oh, look, the makers of Prometheus have blessed us with yet another piece of information in their time, space and movie spanning mystery.

According to the source of the photo (Facebook page for Prometheus), this an attempt at translating info found on LV223 in the aftermath of Project Prometheus’ failure (ok, why not). It mostly seem to confirm that the goo is, indeed, a weapon, and explains the differences between inhaling the goo and ingesting it. So Yay, bits of answers and a brand new question !

But What Does It Mean???

Aside from clearly proving that the black goo is a weapon (as if there was any doubt), this also shows that the method of infection is of utmost importance. If you swallow it, you die somewhere after 36 hours. However, if you inhale it, then it causes severe mutation and aggression.

While the infographic provides insight into why the engineer in the beginning of the movie dies whereas everyone else exposed merely mutates, there are a few unexplained mysteries to go along with all of the other mysteries we’ve talked about before.

Like why does Weyland have this data? How did they come about it?

Is the survivor from the first movie transmitting data back home? No, because then the people from Alien wouldn’t have been surprised about the engineer they find in the beginning. Of course, maybe a follow up mission landed and found the jars but nothing else? That seems unlikely. So yet again, the makers of Prometheus tease and torment us, offering us plenty of info, but no actual answers.

There are also a few other problems possibly more error than intentional.  Like why is there a periodic table on the image? Did the researchers have a tendency to forget the atomic mass of hydrogen? That’s weird. Plus, there’s plenty of CYA in case the plot of a future movie has to contradict this chart, in the form of warnings about incomplete data interpolation. Which really doesn’t make a lot of sense, since an interpolation is an estimate based off the fixed data you have.

Regardless of what the graph says, or rather doesn’t say, one thing is for sure. If as much effort went into solving the energy crisis as we put into solving the myriad mysteries of Prometheus, we’d probably all be driving cars that run on water by now.